Hey everyone! I'm on a drive to get more BookBub followers. Think you can help me out a bit?

Thanks!
Posted by BriandAndersonbooks at 10:20 AM No comments:

The third installment of the the Akiri series, Dragonbane is available for kindle! Huzzah! 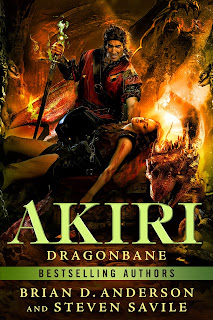 
Posted by BriandAndersonbooks at 5:01 AM No comments:

We Are Not Snowflakes

Okay people. It’s come to my attention that I’m a pompous, elitist, privileged, asshole. I was aware of being an asshole and have been for many years. Just ask around. As for the rest…I’ve never been called pompous. I spend my time at my desk wearing a pair of sweat pants and sometimes a tee-shirt. This is also how I present myself in public. For fun, I drive down to the local VFW and listen to war vets tell stories while we drink beer and whiskey. Not exactly what a pompous person does. Or am I missing something?
Elitist could be more accurate. But only in terms that I work in an elite field. With roughly 15,000 novelists making a living, being one makes me elite – though not necessarily elitist. I don’t look down on someone because of their job, education, or social status. I was not born rich. I am not and never have been a part of what one might call “high society”. Well…unless you count my younger years when I smoked a lot of pot.
And as for privileged, you might be thinking ”White, middle-aged male. Hell yeah, you’re privileged.” The problem is, given what I do for a living, none of that helps me. I could be anyone. I could be black, white, male, female, or an alien from Mars. You only know about me what I tell you. And I could be lying. Morgan Rice has sold millions of books and I only recently found out she is a woman. I still don’t know what she looks like. So as a fantasy novelist, privilege doesn’t help me.
I was called these things by other writers after suggesting to them that they should write 1000 words per day. Understand that these were people with agents and most having been published at least once. I mean, what the hell is wrong with telling a writer to write. No one will pay you to be a writer. They pay you for what you have written. I must have touched one hell of a nerve because the name calling and accusations flew. I was an elitist pig. Yup! A bunch of traditional authors were calling an indie, elitist. I had to drop my pen to be certain gravity was still working.
Some of you may be thinking, “But Brian, not everyone has that much time.” This is true. But once you decide to take that step from hobbyist to professional writer, you have to make the time. You can’t wait for the muse to strike. You must start producing. Being a novelist isn’t about book signings and wine. It’s day after day of sitting behind a keyboard and pushing forward. It’s writing when you don’t feel like it, because it’s your job. In short, it’s hard fucking work that never ends.
You can’t expect to write one novel every five years and remain relevant. You are not going to attain stardom on the strength of a single book. If you think it will happen, all I have to say is, good luck with that. I’ll come visit you at the place you tend bar and you can tell me all about how unfair the literary world is.
We write because we must. I’ve heard that quite a bit, as I’m sure you have. It’s a groovy way to add a bit of artsy-fartsy to writing a novel about swords, dragons, and magic. But the second part of that is: we must because it’s our job. Don’t get me wrong. I love what I do…most of the time. But being a professional comes with responsibilities and obligations. That means I have to write when I just don’t want to. It means writers block doesn’t exist in my world. I have to force myself to keep going. Will the story suck? It might. But I can’t edit what isn’t on the page.


You may think I’m wrong. You may think the others were right about me. All I know is that of the hundreds of successful novelists I know, all of them hold this view. If you are a writer, you have to write. We aren’t snowflakes. We’re beasts – ravenous and relentless.
Posted by BriandAndersonbooks at 7:54 PM 1 comment: