What do I need to Self-Publish?

I am not advocating that people should spend their life-savings or neglect their family. Nor am I saying success is base solely on the money you have in your bank account. But to think you can start a business without investment is laughable. And when you self-publish, that is what you are doing – starting a business.


There is some amazing talent in the indie world that tragically goes unnoticed. And there are some who still think indie is the poor cousin to traditional publishing, rife with inadequacy and talentless hacks. I, along with many others, are trying to change this perception. We’ve come far since the initial indie explosion. We still have a long way to go. But with enough effort, I think we’ll get there.
Posted by BriandAndersonbooks at 2:42 AM No comments:

Akiri: Sands Of Darkness is Live!

It's here! And guess what else? Akiri: Dragonbane is coming next month! 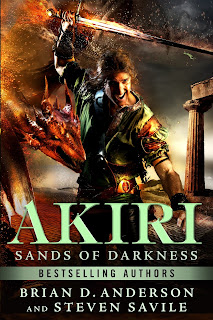 
Posted by BriandAndersonbooks at 11:25 PM No comments: